In academia, before serving as the Low Brass Instructor at Wingate University, Burge was Trombone Instructor at Davidson College, and Chair of the Brass Department at the Canberra School of Music at the Australian National University. He gives master classes, clinics, and recitals around the world, and his students perform as soloists and in orchestras internationally.

Burge gave the Australian premiere of Eric Ewazen’s trombone concerto “Visions of Light” and was a guest soloist at the 2012 American Trombone Workshop held in Washington DC where he performed Ewazen’s “Sonata for Trombone” with the composer at the piano. At the same festival, he was a guest performer with the Washington Trombone Ensemble.

In the United States, he has appeared as a guest clinician and soloist at Juilliard, UCLA, California State University in Northridge, UNC at Chapel Hill, UNC School of the Arts, UNC Charlotte,  Davidson College, Appalachain State University, Ouachita Baptist University, Winthrop University, and Gardner Webb University. He performed as soloist with the Wingate University Wind Ensemble in 2015, and recently returned from Santiago where he gave a master class at the Universidad de Chile. Burge appears regularly as a soloist in many venues around Charlotte. He often is featured on the Rush Hour Recital series of Pulse: Young Affiliates of the Charlotte Symphony Orchestra, having performed the inaugural recital in 2013.

Tom Burge is a trombonist with the Charlotte Symphony Orchestra. He also is the Low Brass Instructor at Wingate University, University of North Carolina- Charlotte, Central Piedmont Community College, and Pfeiffer College, and a clinician and teacher in his Charlotte-based private studio. Burge is host of the radio show “Sunday Evening” on classical public radio station 89.9 WDAV and has been a guest morning, midday, and evening presenter on Boston-based 99.5 WGBH. 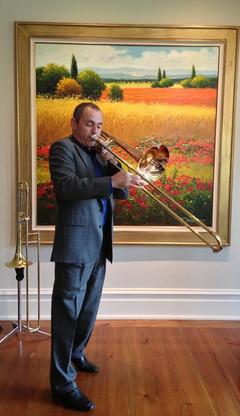